A concert of nostalgia, great entertainment and peace

As another travel experience to blog about, I’m going to start posting my thoughts on both music festivals and major concerts. I haven’t written about too many of these events in my blogging pursuits. But in some cases, getting to these events may take going a bit far from home and would be part of visiting a destination…sometimes, one that is new to me.

I’m not far at all from the sporting / concert arena scene of Philadelphia, though. My most recent drive up to that area was to see the Total Package Tour, headlined by my generation’s boy band New Kids on the Block, with guests Boyz II Men and Paula Abdul at Wells Fargo Center. I hadn’t seen the Philly a cappella group or choreographer / dancer / singer / “American Idol” judge before. But years back, I saw NKOTB at Valley Forge Music Fair with opening acts including Tommy Page (R.I.P.) and Tiffany. Finding out they had a new tour with a local concert date, I had to see them again for the nostalgia of it. It brought back memories of that craze among so many teen girls, include my friends and I. Not to mention all of the fan merchandise…I had tons of it. Two girls in my neighborhood had crushes on Jonathan Knight, another liked Joe McIntyre and Donnie Wahlberg was the favorite of another girl. A few others outside of my immediate circle of friends had Danny Wood pins on their jackets. My favorite was Jordan Knight…his eyes, smile and voice made me melt!

While meeting up recently with a high school friend for lunch, the familiar beat of “You’ve Got It (The Right Stuff)” could be heard in the restaurant. I didn’t know this particular friend when NKOTB first became popular, so it got us talking about which guy we liked the most (she was a Joe McIntyre fan) and if we’d seen them in those early days.

Moments from before the show made me think about how these events bring strangers together. We could all relate to that fandom of performers we’re going to see and even to fond memories recalled by enjoying the same songs. A few people in line near me were excited about particular favorite songs and one woman danced while singing out, “Still sounds good,” a new NKOTB song. When I heard the first two lines of that song via iTunes, I was hooked, loving the mix of nostalgic references throughout the lyrics.

A Wahlburger’s truck was in the parking lot near the side of the venue where I waited and in the distance, enthusiastic screams could be heard. Everyone around me looked toward the lot in hopes to see of the night’s performers.

Doors opened at 6:30 p.m. and once inside, I decided to purchase concert souvenirs – a black shirt with the song title “One More Night” in red lettering, an NKOTB tour book and keychain. As I waited in line, I spotted an elderly woman wearing a shirt that read, “I love Donnie,” a red heart shape in place of the word “love.” A younger fan had on a shirt with the phrase, “If lost please return to…,” but I didn’t catch which name revealed her favorite.

Boyz II Men kicked off the show with the energetic “Motownphilly,” followed by more classics to which the crowd song along. They also performed a great rendition of The Guess Who’s classic rock song, “American Woman.” At some point during their segment of the concert, one of the Boyz shared the news of being honored in Philly with a city street renamed for them. Boyz II Men Blvd was now a part of their hometown and it had just happened earlier that same day. I actually didn’t know about it until that moment in the show, so it was one of the unexpected cool moments from catching this tour.

Paula Abdul began her set list with “The Way That You Love Me,” one I hadn’t heard in a long time. She performed many of her dance hit tunes, leaving “Straight Up” until near the end of her show. But before that number, she talked about back when trying out to be a cheerleader, as well as early inspirations which drew her to dancing. My favorites of the songs she performed included “Straight Up,” because back in high school, I totally experienced that sense of, boy, just tell me how you feel? Another one she sang that I’ve always loved was the song “Rush Rush,” partly for the video’s “Rebel Without A Cause” theme. That, as well as the way I felt about that same crush when this romantic ballad first began to play on the radio and TV.

NKOTB made a dramatic entrance, coming up out of the stage on a platform section and into layers of fog effects. It was unbelievable, the big moment, getting to see my favorite boy band again after all these years! They kicked off their show with a new song, “One More Night,” Jordan stepping out from the group as the fog slowly dissipated.

Whenever they sang songs from their “Hangin’ Tough” album, it took me back to those early days of the New Kids craze. Not only that, but memories of seeing them in concert came to mind. I remember standing along a fence with so many other fans, waiting to catch a glimpse of Jordan, Donnie, Joe, Jonathan and Danny as they emerged from a tour bus. Screams erupted all around as they came into view and then it was time to head into the concert hall.

But it wasn’t only the favorite tunes from those days I was excited to see performed this time. As songs from “Thankful” became available to buy, I bought them on iTunes and played each one over and over. I love the reminiscent vibe of “Still Sounds Good” because anyone could relate to it, thinking back to whatever pop culture moments they grew up with and enjoyed. “One More Night” and “Heartbeat,” romantic in their own way, could make any fan swoon upon hearing lyrics sung by their favorite New Kid member. “Hard (Not Luvin’ U)” brought Jordan out front and center stage, driving the audience wild as he performed a sexy dance.

Other songs on the set list included “Dirty Dancing,” from another album over the years, catchy with its references to the movie of the same name. “Remix (I Like The)” is full of cool beats to gets fans dancing. “Step By Step,” going way back again with this one, was my favorite hit from the same-titled album. Another swoon-inducing performance, also from their early years, was “I’ll Be Loving You Forever,” Jordan singing lead and hitting all those high notes.

A couple of sweet moments happened during NKOTB’s time on stage. Donnie brought a young girl up on stage. They were too far for me to get a good photo, so I captured the image via a large screen. Part of the girl’s face was partially whited out in my photo from the lighting, but okay enough to show her excitement to be onstage. Then he brought another young girl up to join him moments later. I couldn’t quite make out the words on her shirt. Donnie read to the crowd, “My first concert.” They had been my first concert, too. One lucky woman was serenaded with “Happy Birthday!”

Showing his humorous side, Donnie made a few jokes when an image of their first album cover showed on a large stage screen and another time when getting ready to sing a song called, “Dirty Dawg.” As they performed it, scenes from the video played and I hadn’t seen it before. So, after the concert, I looked it up on YouTube – loved the way Jordan sang it, his expressions, as well as his street style from that time. He reminded me of my high school crush, who had a smoldering expression, along with the similar way he dressed. Not just in that video, but in general as well.

Donnie brought Boyz II Men back up onstage with their sound of Philly, through an encore of “Motownphilly.” He also recognized their Boyz II Men Blvd honor, holding up the sign while he and fellow NKOTB members shared the stage. It was such a great moment of celebrating my nearest major city, along with its art and entertainment brought to the world. 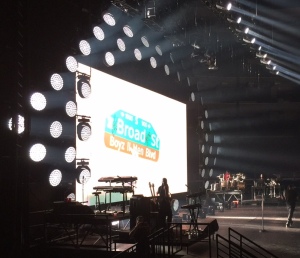 Near the end of the concert, NKOTB performed Queen’s “We Will Rock You,” which sounded awesome back-to-back with “Games.” With the crowd pumped, Donnie and fellow New Kids led everyone to get their peace signs up as an inspiring and powerful message. It was one of coming to the show, having no fear in doing so and made me think of how so much has changed in the world since last seeing NKOTB. Back then, we didn’t have to worry about and couldn’t even imagine tragedies such as the terror attack at Ariana Grande’s show in Manchester, England…or anywhere else we go for fun and entertainment. Peace signs filled the audience in the spirit of fighting fear.

Overall, it was amazing to see my favorite boy band again and with a wide range of spectacular effects. Along with their earlier hits, I’ve got new favorites among their latest album, others over the years…from which they had a great mix for the audience to enjoy. They didn’t have Jordan Knight’s solo songs on the set list, but I love the work he’s done on his own, as well as collaborations with Nick Carter of the Backstreet Boys. My favorite Nick & Knight song is “Drive My Car.” I loved also getting to see live performances by artists who took me back to my high school years with their songs. Next time, I hope one or more of my friends can join me and maybe we’ll be down in the pit area by the stage. It was one night full of nostalgia, much like NKOTB’s new song “Still Sounds Good.” Below are more favorite photos of moments I captured during the show. 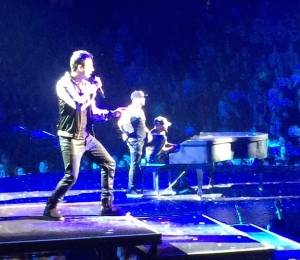 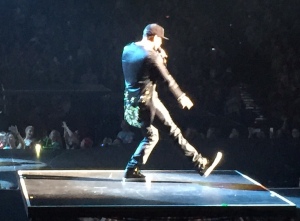 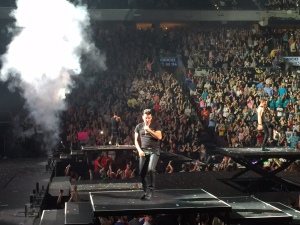 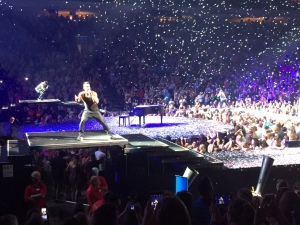 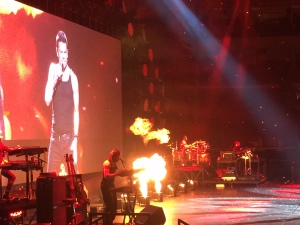 With the Total Package Tour over now, I already can’t wait to catch NKOTB when a concert date brings them my town again!

A freelance photographer and blogger, I'm also a non-traditional graduate of Cabrini College with a B.A. in communication, minor in English and concentration in film studies. As a student, I was a staff writer, photographer and copy editor for the Loquitur. In my final semester, I assisted in promoting campus literary events for Woodcrest Literary Magazine. I love travel, historic places, nature, wildlife and the arts. I hope to be involved in some way with one of those areas throughout my media career. Currently, I'm pursuing my M.F.A. in creative writing and publishing. Read my film blog at http://cdwyerfilminspired.wordpress.com - and my literary blog at http://cdwyerbookishgrad.wordpress.com
View all posts by caroldwyer →
This entry was posted in Concerts, Entertainment, Music, Nostalgia, Philadelphia, Pop Culture, Travel and tagged Ariana Grande, Backstreet Boys, Boyz II Men, Boyz II Men Blvd, Concerts, Danny Wood, Donnie Wahlberg, Entertainment, Joe McIntyre, Jonathan Knight, Jordan Knight, Music, Music Festivals, New Kids on the Block, Nick Carter, NKOTB, Nostalgia, Paula Abdul, Peace, Philadelphia, Pop Culture, Queen, Teen Crush, Thankful4NKOTB, The Guess Who, Tiffany, Tommy Page, Total Package Tour, Travel. Bookmark the permalink.

1 Response to A concert of nostalgia, great entertainment and peace

Building a community of writers, artists, and readers across the Delaware Valley

tales of the fey

Life As I Know It

Elegant, evocative travel on land, sea and air both past and present. The world in all it's serene, sultry wonder.

The Journey is Here
Free Tony The Tiger
Job Search 3.0

A Funny, Intelligent, and Ambitious Blog

A Blog for the National Aquarium Community